Letters and colors: an abecedary

In which I ask myself what color each letter is, in order of the alphabet and with a side excursion into musical notes 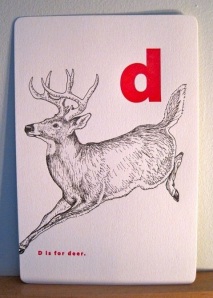 Almost
my dearest. This d is the red of my a. It’s printed by Nik Bresnick of bittersugar. Thanks, Nik!

Letters have had colors for me for a long time. When I’m reading, they recede and the meaning of the words takes up most of the room. But when I’m thinking of words or letters specifically, the colors float there. Some are less vivid than others. Sometimes to see a letter’s color I need to see it next to other letters. Some change depending on what other letters they’re next to.

A result of this synesthesia is that certain of the endearments have colors. The originating word, in my mind, has a palette that infuses, transforms, as it appears in the words that make the poem. Thus “dreamboat” is grass green (d), pinky red (a), bright blue (e), all dulled down a bit by the dark black-brown of the r and the muddy purple of the m. “Sweetheart” has a similar blue-red thing going, deepened by the blue of the w and cheered by the vague but warm-colored h.

Where do these colors come from? I think the A comes from a Fisher-Price magnet alphabet that we had on our fridge when I was growing up. That bright pinky red. But of the others’ provenance I am less sure, because that alphabet does not continue to match up. Oliver Sacks could probably tell me.

Below, a record of what colors the letters have in my mind as of this September. The problem being, of course, that saying one version of a thing can make it more true. Thus I intend to avoid rereading this record. I like shift.

D: green, a bright green but not as bright as grass green, one with a little more blue in it.

F: can change depending on the context; its color is harder to discern, but it is yellowish, orangish. Faint.

G: a darker green than D.

{This is verified by considering it in another context—G tuning for five-string banjo goes g(for the little string)DGBD, and the D and G are different shades of green next to the B’s faint brown, which I don’t like. This may be one of the several reasons I favor A (aEAC#E) and D (aDADE) tuning: both of them have a bright A—and an equally bright E. Cheerful A, cool, vivid E—no wonder they are winners).}

H: another vaguey beigy one.

I: white or pale yellow, almost cream, depending.

J: green, paler than the other greens, near mint.

M: purple, but not a lurid purple, one with some brown in it.

N: neutral, more yellowy than L or I, almost like the page of an old book (not a paperback with poor quality paper, but one of the older ones, a smooth, matte surface gone ivory, dignified).

Q:—hadn’t thought about it before directly; I don’t think I’ve ever gone this far down the alphabet—it’s almost teal, but not with an attitude, just a quiet blue-green.

R: almost black, especially next to the red of A.

S:—can’t tell, but it’s important to the colors of other letters.

U: neutral, a cool white in contrast to the warm white of the other letters like it.

V: green, pale green, nearly like a new leaf but not quite so vivid.

X: kind of like A. And K, come to think of it–something about those diagonals, those pinks, that bold, firm red.

Z: almost orange, before orange was a color, or gold before it got so brazen.