One thing about computers: They make it easy to come up with a plethora of options, and harder to take the time to think about a single option’s merit. I always begin writing an endearment by hand. Despite this, on typing up the initial draft, I often end up with several nearly identical electronic iterations, which begin to blend together on the screen. I print them out, but it can still be hard to tell what’s what. 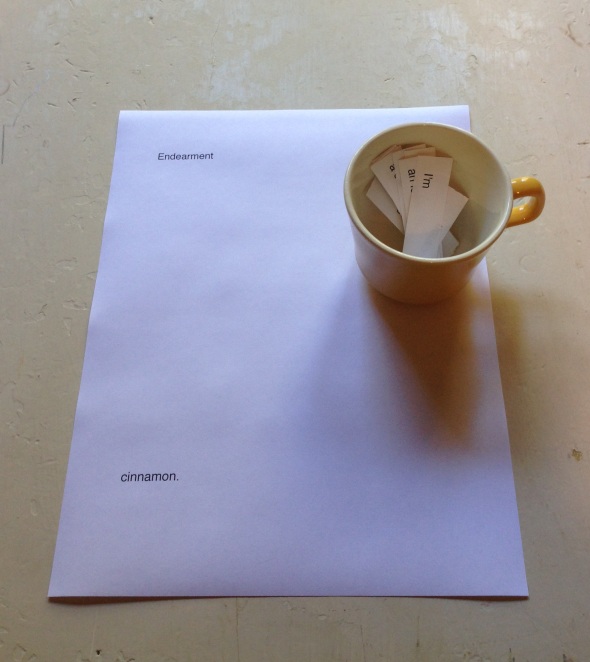 Thus the trusty scissors, which I have just employed for cinnamon. The poem has started to shape itself into phrases, but their relation to one another has been eluding me. I printed the poem out and cut it into word- and phrase-sized slips of paper. A few rearrangings, a hand-written recording of the result, and suddenly a new option leapt out. Not a change to make the poem perfect, but one I hadn’t seen on the screen.

Was it the slips of paper? Was it the clean, blank page, with title at the top and final word at the bottom? Was it the writing of a slantwise draft in the margin, which is now the only draft on that page? Or was it just that essential ingredient of the endearments (and of most poems), time?

Speaking of time, cinnamon is from a very other one. I encountered it in a post by Katherine Connor Martin on the Oxford Dictionaries blog, about endearments that have fallen from use. Cinnamon is Chaucer-era, and it seems a fine one to bring back. Next in line: turtle (although I am taking the liberty of using the full phrase turtle dove).

And speaking of computers, and vexation, a project I’ve been working on for a while is just released. Forces of Attention, a series of objects designed to help people mediate their relationships with their computers, debuts with series 1: THE WORLD IS NOT IN HERE. You can get a copy at todointhenewyear.net. If you do, and if you have thoughts about it, I’d like very much to know.