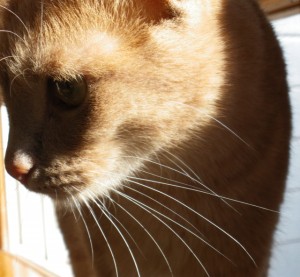 Tisko T., who is relevant here

In the land of science, a problem that comes up is that negative results are (people suspect, anyway) underreported. So, say, if someone shows a correlation between two things, their study might have better chances of getting published, and of getting talked about, than if they did a study and found no correlation. The lack of correlation is valuable information, but it’s maybe less exciting.

I was talking with L at the Fun-A-Day NC show about choosing what to exhibit. If I did a project, said L, I would want to pick the best things and show them, not show every day’s thing. That makes sense, I said. (And, in fact, that is what I did this time.) But there was also something nice about K’s every-day drawings of portraits on coffee receipts, and similarly about A’s comic for each day of the month showing and telling about some thing that happened that day. It’s a matter of what you’re privileging, I guess&mdash;quality of the art, or the process of making the art. The process aspect is being made into lots of books lately. My year of x. A month in y. And I am tempted by it also. This is another way of saying, I’m going to report all of my results.

But none of these things needed proving—and this is where the project is more like art: even if those ideas are as solidly acknowledged as the theory of evolution, and perhaps because they are, it seems useful and fun to play with what they are talking about. (You could argue that “words are really interesting” is not a proven truth, sure, but if “interesting” is substituted with “complex,” or “intricate,” or similar, it becomes less arguable.) Anyway, the point of each poem is not to test what might be a universal, it is to play with particulars and, because of some certain already-established universals such as the pleasingness of vowels, to enjoy it. —And because of other universals such as the diversity of words and meanings in English, to be surprised by it, from time to time.

It would be more scientific to include the “failures”—the words that do not make any or enough words to make a useful poem—along with the “successes.” It would be more scientific to call them all “results” and not taint these results with ideas of predetermination. I do hope when I begin with a word to find other good words in it. I also hope, though, to know it better—and sometimes knowing it better just means knowing the limits to which it can go. Maybe a list of these non-anagramming words would be relevant. But what belongs on that list and what doesn’t?

Take bobo. E said, I thought about sending you endearments, but all the ones I like have just one or two letters, and I thought, that’s no good. Thankfully, she sent it anyway. It has the feeling, to me, of bumping shoulders with someone, jostling them in that friendly way. And when E calls Tisko (the cat with whom I live) Bobo, I can hear the sweetness she lends the word. To know this word is an endearment is good. Scientifically speaking, to see what happens is good.

And what happens with “bobo” is—well—likely something like a one-line poem. Or maybe two—which leads me to wonder about one of the parameters I hadn’t had the need to set explicitly before. Is O, bobo! complete? Or should a complete one of these poems use at least all the letters of the endearment in the rest of itself? That is, should it contain at least one complete anagram of itself? I haven’t made up my mind.